In the late 1800s, the North Carolina mountains were covered in old-growth hardwood forests, which included oaks, chestnuts, hickories,maples, and beech trees. Settlers 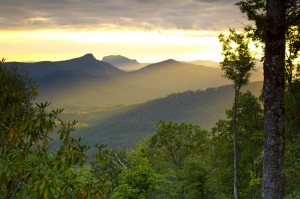 took down trees in small numbers as needed for clearing land or obtaining wood.

Large-scale logging began in the 1890s and 1900s, when railroads came to the southern Appalachians. Railroads and rivers were used to transport the enormous logs. Sawmills powered by steam engines were set up in the forests to convert logs into lumber.

The Brevard Tannery and the Rosman Tannery, both established in the early 1900s, used bark from trees to tan leather.

As you hike around these mountains, you won't see many huge trees but you will see large old stumps and now you know why.