Cashiers North Carolinais rich in history and tradition. One of the gems of the area is the High Hampton Inn located on 107 South, just a few minutes from the crossroads in Cashiers. The property features fine accomodations, dining, a public golf course, and many other amenities. Our friends and clients often ask us about the High Hampton and its history, so here is a brief descripton and how it all began courtesy of www.highhamptoninn.com.

The History of High Hampton High Hampton Inn in Cashiers, NC has been a summer retreat and place of Southern hospitality since the early 19th century. The Hampton's, an aristocratic South Carolina planter family, traveled by train from Columbia to Greenville and then by horse and buggy up the rough mountain roads to Cashiers. The Hamptons and their friends came each summer to escape the heat and mosquitoes that plagued them in Columbia and Charleston. They enjoyed fishing in the crystal clear mountain streams, riding fine horses through the lush green forests, and sitting on the porch of the Hampton Cottage sipping mint juleps and feasting on freshly cooked game and tender mountain trout. 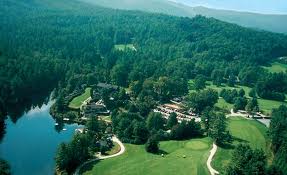 One of the most famous members of the Hampton family, Wade Hampton III (1818-1902), purchased the property from the Zachary family. Mordecai Zachary, whose nearby home, is being restored by the Cashiers Historical Society, helped Wade Hampton build the Hampton Hunting Lodge. The family referred to their estate as the Hampton Place or The Valley and built The Church of the Good Shepherd (located directly across the road), as well as the school for the mountain children (now the Schoolhouse Cottage), located just north of the church.

Prior to the Civil War, Wade Hampton was considered one of the wealthiest men in the South. Although he was not in favor of secession and had already freed his own slaves, he used much of his wealth to raise a cavalry regiment, which he led into battle throughout the Civil War. By May 1862, after being wounded at the Battle of Seven Pines, he was promoted to brigadier general. After the battle of Gettysburg in 1863, he was promoted to major general.

Exhausted and financially and emotionally drained, General Wade Hampton returned to his beloved mountain retreat after the war in the late summer of 1865. His brother Frank and son Preston has perished in the war. The mountains gave him strength to carry on. In 1876, while sitting on the porch of the Hampton Hunting Lodge, he received news that he had been elected governor of South Carolina. He later served as a U.S. Senator during the difficult Reconstruction years.

At some point in 1880s, the property was transferred to the three unmarried sisters of Wade Hampton. In 1890, Caroline Hampton (1861-1922), a niece of Wade Hampton and the three maiden aunts, married Dr. William Stewart Halsted (1852-1922). Halsted was a chief surgeon at the newly opened Johns Hopkins Hospital in Baltimore who was famous for his superior surgical techniques and a pioneer in the use of anesthesia. Caroline had completed nursing school in New York City in 1889 and subsequently joined the staff of Johns Hopkins, where she met Dr. Halsted while serving as his scrub nurse in the operating room.

Caroline had enjoyed many happy times with her uncle hunting, fishing, and riding on the family estate. The newlyweds honeymooned at the Hampton Hunting Lodge. Dr. Halsted became enthralled by the beauty of the land and purchased the High Hampton estate from Carolines aunts. He renamed it High Hampton after the title of his familys ancestral estate in England, which was named High Halsted. The Halsteds greatly enhanced the beauty of the estate by planting exotic trees and shrubs, most of which are still thriving on the front lawn of the Inn. They came from Baltimore each summer to enjoy a respite from the hot weather and spent their time gardening, raising a superior collection of dahlias, reading, pursuing an amateur interest in astronomy, and acquiring more land. They also farmed and kept hogs, cattle, and of course horses, as Mrs. Halsted was a true Hampton and outstanding horsewoman. Several area residents remember visiting the Halsteds. The late Newell Wright described High Hampton as the most beautiful place in the country. His grandfather, Marion Wright, did a lot of work for Mrs. Halsted. Marion used to bring Newell to see Mrs. Halsted on Sundays, and they enjoyed lunch or dinner at the Halsteds great big house many times. 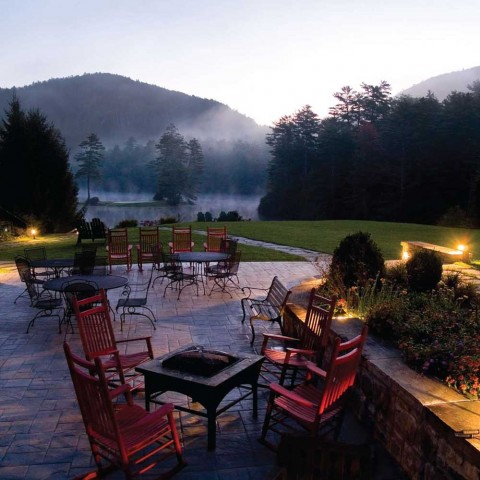 Madge Dilliard Merrells parents also took her to visit the Halsteds. With an uncanny memory, Madge remembered many details about the Halsted family and their home. She recalled Mrs. Halsteds abruptness and frankness as well as her dress, which tended to be more masculine than clothing worn by most mountain ladies at that time. Madge remembered the Halsteds home being peculiar because they had big comfortable couches and chairs, so different from the traditional mountain furniture. Large fireplaces made the home nice and warm, and dachshunds (Mrs. Halsted took them everywhere) were around the living room on brown baskets. The grounds had quince trees, beautiful dahlias, and big flocks of guineas hollerin.

Dr. Halsteds connection with Johns Hopkins proved to be beneficial for several of Madges relatives. Nannie Zachary, Madges great aunt, was treated for cancer there and lived a long life. Lynch Dilliard, Madges brother, rode to Baltimore on the train to have his tonsils removed. From the correspondence between Dr. Halsted and Doug Bradley, the Halsteds head gardener and caretaker, as well as his concern regarding the Dilliards health, it is evident that Dr. Halsted took a great interest in the well-being of many of the local Cashiers residents. After Dr. and Mrs. Halsted both died in 1922 and left no heirs, the Halsted Estate was for sale. Mr. E.L. McKee, a Sylva, NC, businessman and industrialist, and his family decided to take a detour on their way to the former Fairfield Inn in Sapphire to meet Governor Morrison, who was vacationing in the area. As soon as Mr. McKee saw the beautiful grounds, spacious Halsted Cottage, and historic Hampton Hunting Lodge, he made plans to buy the property.

So began a long relationship between the McKees and the land that was treasured by the Hamptons and the Halsteds. When Mr. and Mrs. E.L. McKee purchased the property, they constructed a two-story inn and soon after a golf course and tennis court. The McKees restored an old farmhouse on the property, the Nancy Cottage, which they often visited on weekends and holidays, and more frequently during the summer. Mrs. E.L. McKee (Gertrude Dills) was North Carolinas first female state senator, and the couple entertained many fellow legislators, friends and family members at the Inn.

On May 15, 1932, a fire started in a closed flue of the Halsted Cottage and quickly spread to the nearby Hampton Hunting Lodge and the Inn, destroying all of the buildings and their historic contents. Lillian Bradley Hyatt, who was living in a home near the Upper Zachary Cemetery, remembers the ashes falling on her as the fire blazed over half a mile away.

Construction of a new inn and several cottages began in the fall of 1932. In the height of the Depression, 20 men, including contractor Joe Wright, managed to complete the project by May 1933. The new Inn, built on the site of the Hampton Hunting Lodge, was larger than the original Inn, had three stories, a majestic four-sided fireplace, and was covered with chestnut bark, making it naturally insect-resistant. Since Mr. E.L. McKee had several other business interests in Sylva, he did not actually run the Inn himself. He hired Mr. and Mrs. Frank Lewis of Virginia as managers. Marjorie Harrison Lewis first came to the area to help start a girls camp in nearby Sapphire. The camp is now known as Camp Merrie- Woode. Frank and Marjorie Lewis ran the Inn like clockwork until their retirement in 1955. They also found time to help in the Cashiers community. The Lewis were instrumental in helping to restore The Church of the Good Shepherd and also helped start the Cashiers Thrift Shop, whose funds helped build and maintain the Cashiers Community Center.

When their parents purchased the Halsted Estate, Bill was nine years old and Lyndon was eight. Bill and Lyndon began working at the Inn at a very young age. Bills first job was selling Cokes and items in the lobby shop, including perfume, a hot seller according to Bill. As they grew older, Bill and Lyndon worked on the front desk. As part of his job, Bill rode to town on horseback to take the mail and to get change from various merchants, as there were no banks in Cashiers. After both Bill and Lyndon graduated from the University of North Carolina at Chapel Hill and received MBAs from Harvard Business School, they pursued different careers. Bill worked on Wall Street and later for Southern Bell in Charlotte. Lyndon served as vice-president of Wachovia Bank and Trust Company in Asheville. He and his wife Ernestine and their three children Ann, Lyndon and William came to High Hampton every weekend and spent their summers staying in the Nancy Cottage. As the children came of age, they also began working at the Inn. 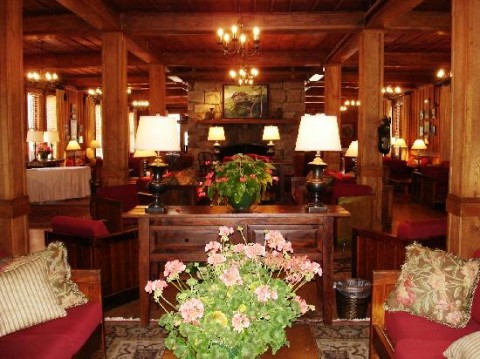 In the late 1940s, Bill McKee returned from Charlotte and began helping his father with various business interests. His mother Gertrude died in 1948. When his father died in 1952, Bill became much more involved with the operation of High Hampton. He was named president of High Hampton Inc., with Lyndon serving as vice-president until his untimely death in 1961 at the age of 46. Lyndons children acquired 600 acres of the High Hampton Estate and built the prestigious Wade Hampton Golf Club, just south of High Hampton.

In 1958, Bill married Lily Byrd of Asheville, NC, and they had a son William Dills McKee, Jr. Little Will, as he was affectionately called, grew up running around the Inn. Once Will was old enough, he began working in many different capacities, including bus boy, teen room manager and maintenance crew worker. After graduation from the Cornell School of Hotel Management in 1982, Will returned to High Hampton to work with his father. Today, Will carries on the family tradition of his father and grandfather.

What began as the Hamptons retreat in the 1830s continues as a haven today, more than 170 years later. Guests from many different states and countries find a welcome relief from the hustle and bustle of everyday life while vacationing at the Inn. The cool mountain breezes continue to blow and refresh just as they did in Wade Hamptons time. High Hampton still boasts Southern hospitality at its finest with Will McKee and his staff meeting and greeting guests on a daily basis. The kitchen continues to provide traditional High Hampton fare, such as famous fried chicken, fresh mountain trout and mouth-watering desserts. In these complicated times, it is refreshing to find a place where very little changes, except the seasons.