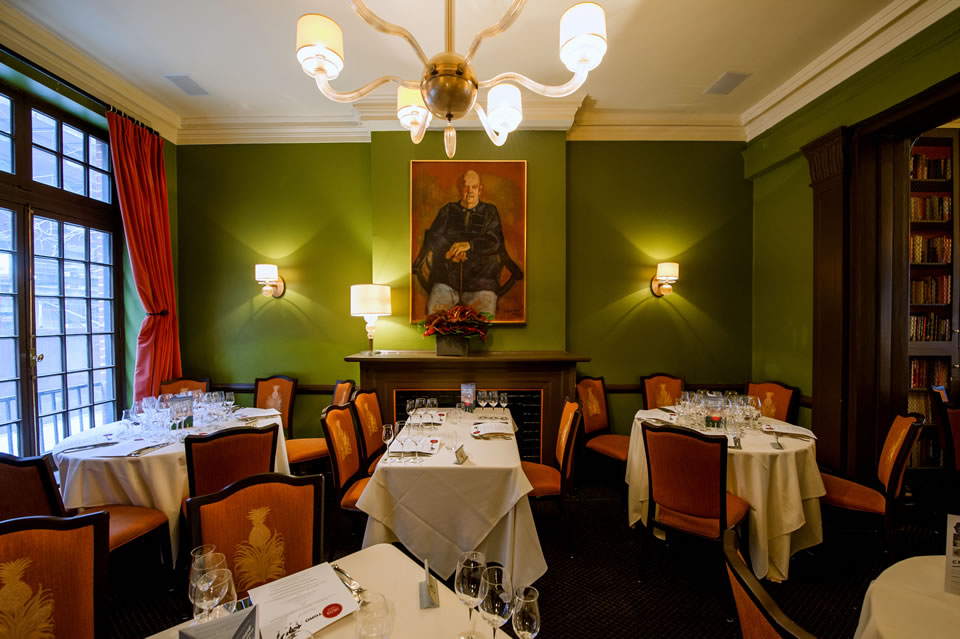 It’s no secret that the world currently has an overabundance of celebrity chefs. They put their name on everything from spatulas to dog food. In this day of blogs and YouTube, anyone can aspire to achieve celebrity status and acquire their own show (and a cult following) on the television channel that’s wholly dedicated to food. You could even say that the celebrity chef movement spawned an onslaught of celebrity psychologists, celebrity doctors, and celebrity dog trainers.

But long before reality TVbefore cooking was even a form of entertainmentAmerica was not a place that came to mind when people thought of sophisticated gastronomy. It took pioneers such as Julia Child to bring America to the forefront of gourmet cooking. Although many consider Child to be the first celebrity chef, it was a man named James Beard who hosted the first-ever televised cooking show.
Many know his name, but few know much about him. Born in 1903, Beard emerged from a culture of microwaved TV dinners, Jell-O molds, and Spam. He was raised in the Pacific Northwest by his self-sufficient English mother, who taught him to cook the seafood and wild berries that they gathered themselves from the Oregon beach.

A fierce student of the theater, he lived abroad for several years to pursue his dream of acting at his mother’s encouragement. After eight years of failing to break into theater or movies, Beard was forced to learn to make money some other way. He started a catering business that later blossomed into a food shop called Hors d’Oeuvre, Inc. He then began what was to be a prolific career writing cookbooks (he would publish over twenty-five of them before his death in 1985). Upon his return from the war in 1945, Beard jumped right back into the culinary world, appearing on NBC in America’s first cooking show.

“This is Sarasota Unbleached Flour. Let me tell you what unbleached means. It means untouched, unartificial, unfooled with, untampered with, unmessed with, unfiddled with, uncorrected, unperfected,” a stout James Beard matter-of-factly touts to the camera.
This commercial for Sarasota Flour encapsulates just what made James Beard such an icon. He was one of the first to shake America from its lazy slumber of canned food and baking mixes. Some have described this period as “the death of food.” Companies had discovered the gold mine that was the American housewife and the result was a movement of factory farming, fast food, and processed food that America has yet to fully recover from. Beard railed against the idea that easy is always better. He suggested buying produce when it’s in seasona common sense idea that was revolutionary in a time when “organic” was just thought of as a type of chemical compound.

As his ideas gained popularity, Beard established the James Beard Cooking School, with locations in New York City and Seaside, Oregon. He spent the remainder of his life writing cookbooks, traveling, and tirelessly teaching others his concepts of good food, ethically prepared with fresh ingredients. He was eventually recognized by the New York Times as the “Dean of American cookery” for his efforts in coalescing American cooking traditions into a national cuisine.

Upon his death, Julia Child urged Peter Kump, a former student of the James Beard Cooking School, to purchase Beard’s Greenwich Village brownstone and continue Beard’s legacy. Although its purpose has expanded over time, the James Beard Foundation’s core principles have remained the same as was originally stated by a press release on the day it opened in 1986: “to provide a center for the culinary arts and to continue to foster the interest James Beard inspired in all aspects of food, its preparation presentation, and of course, enjoyment.”

The foundation now hosts over 250 events annually, featuring bourgeoning chefs from all over the world. It also launched the James Beard Awards, considered to be the food industry’s highest honor and called by Time magazine “the Oscars of the food world.” For more information about James Beard or to see the James Beard Foundation’s calendar of events, visit the foundation’s website at jamesbeard.org.