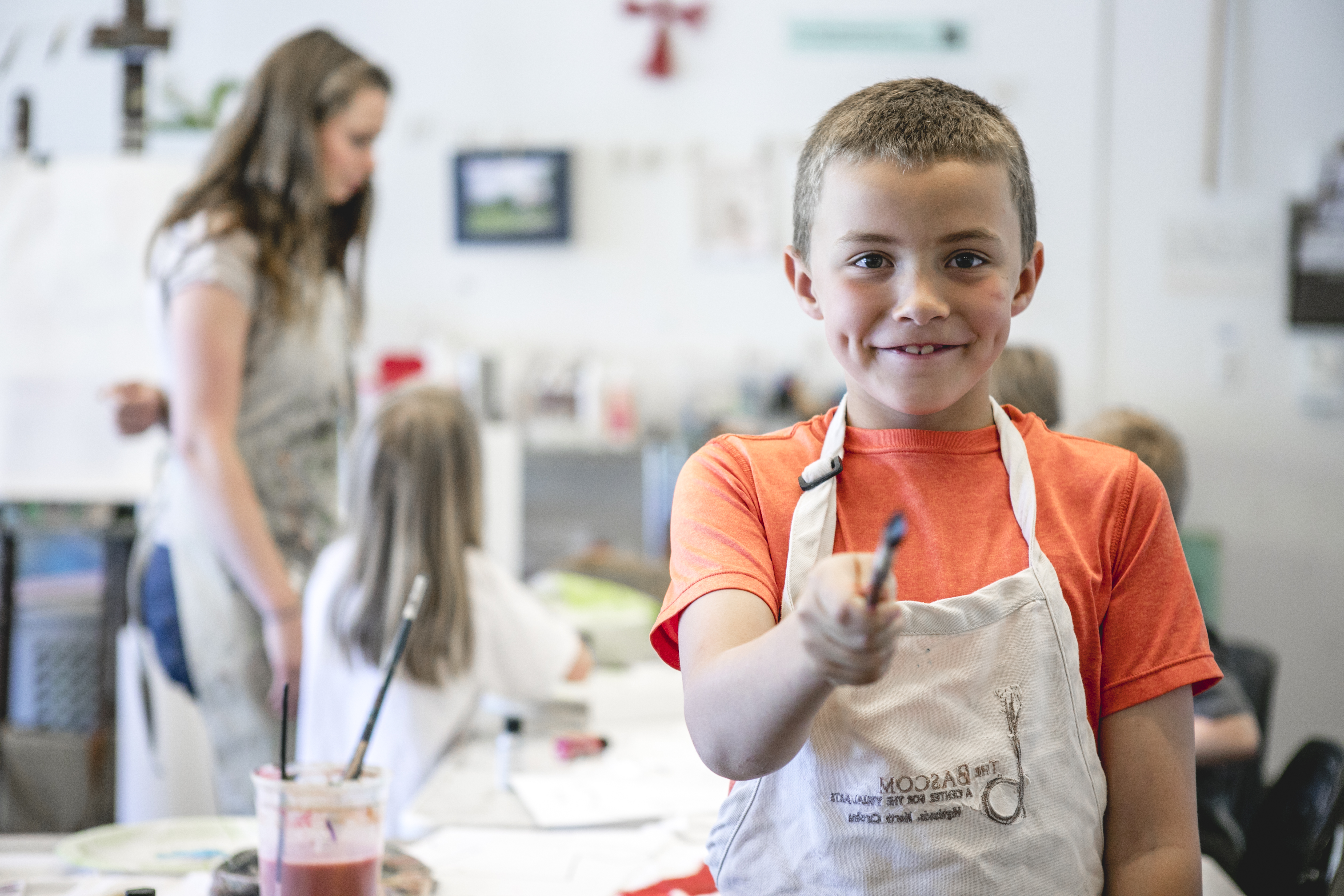 Cross the covered wooden bridge just off Franklin Road in Highlands, and you will find yourself on the magical campus that is The Bascom.
Set on six lush acres of what was once Crane’s Horse Farm, this extraordinary center for the visual arts is a sensory treat for anyone who loves art.
You know you are somewhere special long before you walk through the door. To one’s right is the original horse barn which has been transformed into a ceramics center. The main building, designed by the Atlanta architectural firm of Lord Aeck Sargent, is composed of wood, glass, and stone to pay homage to the natural materials that are native to our part of the world.
A walking nature trail surrounds the campus, containing a variety of site-specific sculptures comfortably positioned among indigenous plants and flowers. An outdoor amphitheater, tiers defined by stone seating, is the perfect setting for weddings, classes, and guest lectures.
Like the warm hostess that she is, Teresa Osborn, meets me at the Center’s front door. As executive director, she quickly explains how she sees the Center’s three important missions: exhibition, education, and outreach. This is no hushed gallery of hands-off, “important” art—nor is it intended to be.
The exhibition aspect of the Center’s mission is everywhere you look, as the 30,000 square feet of space abound with remarkable pieces created by artists from the Southeast, many of whom call the Blue Ridge Mountains home. Oil paintings mix comfortably with photography and pottery, the occasional piece of primitive furniture and whimsical pieces like a room-size “tree” composed of discarded clothing. One can also find jewelry, basketry, and wood-turned vessels here. The collections are fluid so visitors can enjoy a totally unique experience each time they come.
A fun aspect of this art center is the opportunity for hands-on creativity. Check out the “smARTspace” loft on the third floor, and try any of many self-directed art activities. A “wishing tree” downstairs invites visitors to write their deepest desires on papers to hang from a tree. The wishes are as random as you would expect, from “I wish I was a horse” to “I wish I could destroy my computer and phone.” These two areas speak to Teresa’s deepest passion: that art be a unifier, accessible to all, regardless of income, ability, or anything else.
Education is unquestionably a big part of The Bascom’s mission as well. The Center offers artist residencies, fellowships and internships in ceramics, photography, sculpture and community, which is a teaching position involving outreach to all ages. Residencies range from two weeks to one year and afford artists housing, teaching opportunities, unlimited studio access, and the opportunity to sell their art.
The community at large is a huge focal part of the educational component, and an adult education calendar offers a palate-pleasing menu of everything from “Playing in the Clay” to “Highlands Landscape Photography.” In addition to after-school classes during the school year, area children (and visiting grandchildren) are invited to eight different art day camps in the summertime. Private lessons, too, are available for all ages through Art by Appointment.
“Outreach,” says Teresa, warming to a subject dear to her heart, “is a yearlong activity, diverse and widespread.” Area youth are served through school programs: the Boys and Girls Clubs, Big Brothers Big Sisters, and the Gordon Center for Children, to name just a few. The needs of our adult community are addressed through programs like those at Cashiers and Jackson County Senior Centers, the Center for Life Enrichment, the Chestnut Hill retirement community, and the Eckerd Living Center.
It is no small feat that admission to this visual feast is free. Thanks to year-long sponsors, such as Delta and The Chaparral Foundation, The Bascom is accessible to everyone. A robust membership lends further support, as do various sponsors of individual exhibits.
The vision for this Center began in the 1980s, when Watson Barratt’s estate made possible an exhibition space in the Hudson Library. Proceeds from the sale of his family home on Satulah Mountain founded The Bascom, which honors the maiden name of his wife, Louise Bascom Barratt. Although he died in 1962 when Highlands was still a village, his belief in the need for a permanent gallery was prescient. Today, more than 20,000 individuals visit The Bascom each year, and that does not include all those who learn and create at the Center, or the thousands of people who are enriched through the outreach programs.
A centerpiece of Teresa’s delightful, art-cluttered office, is a charming piece of decoupage, teeming with buttons and ribbons and miniatures, created by a gentleman who struggled with developmental challenges. His family, she says, was stunned and thrilled to see how much joy he gleaned from the compilation of this masterpiece, and she keeps it in a place of honor to remind her always, of the life-changing possibilities of art.
The Bascom’s ever-growing impact in the community is a living testament to Watson Barratt’s foresight and a gift to all of us who call these mountains home. 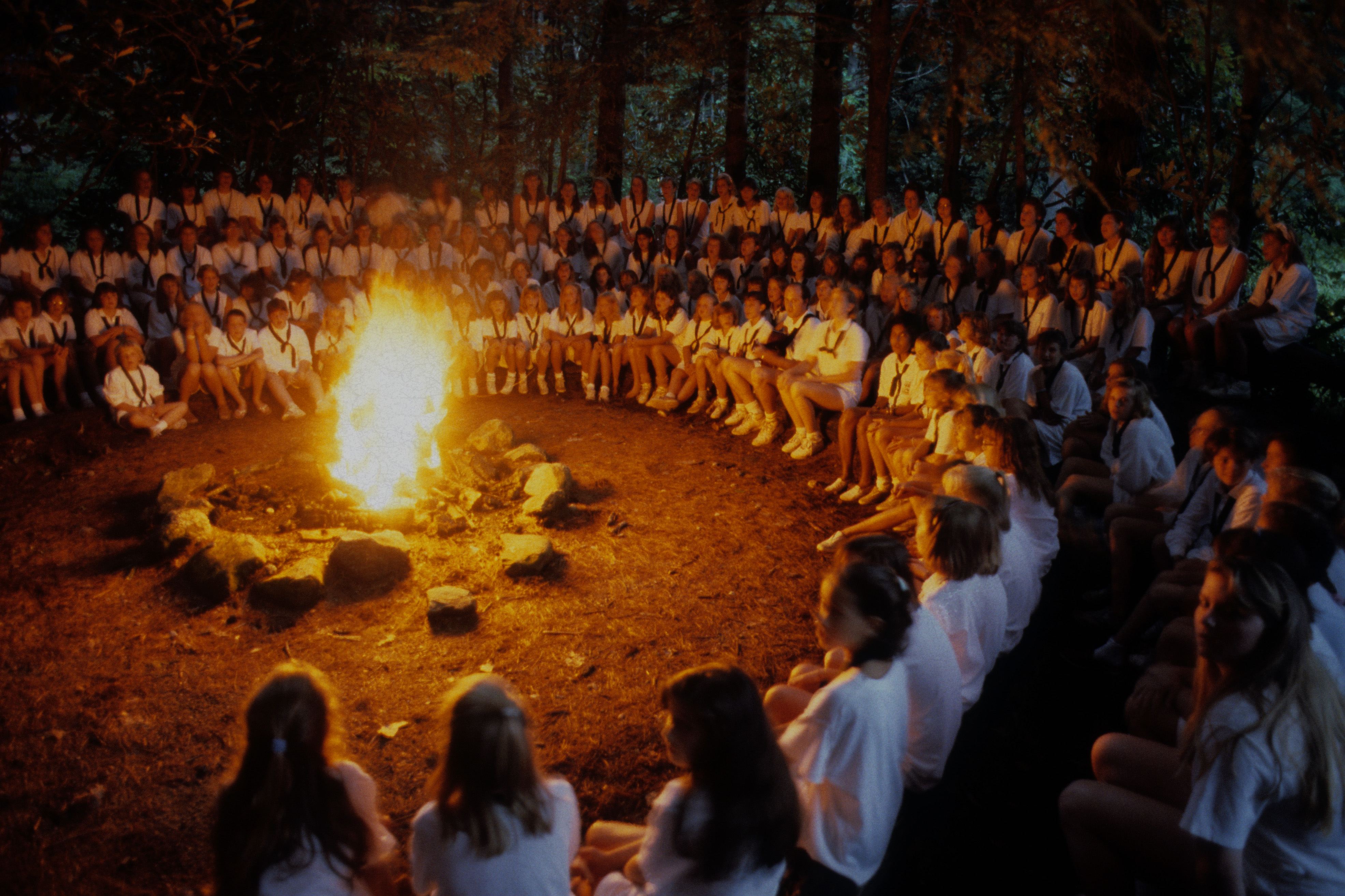 For others, the outdoor experiences inform their eventual life path. Holly Pierce Ambler, who lives in Boone, North Carolina, spent ten summers at  Merrie-Woode, as both a camper and later as a counselor.  She began as a very homesick ten-year-old, sending home several impassioned letters the first week, begging her parents to come get her.  But somewhere into the second week, the counselor who held her in her lap at the nightly campfire and the others who urged her to try outdoor activities turned the tide, and she was hooked.  She admits that prior to her camp experience she had very little outdoor experience, but the summers on Lake Fairfield were so influential that she eventually earned a college degree in outdoor experiential education.  Her first post-college job was as an instructor at the National Outdoor Leadership School. As is often the case, her aunt, sister, and cousins are also alumnae.
Sara Elizabeth Jackson, a sophomore at Auburn University, is returning this summer for the 11th time. It will be her third year as a counselor, an experience she has come to treasure even more than her time as a camper. She loves seeing the young campers return year after year, noting their development, and considers it a privilege to encourage and guide them.  She has become what is called the “Weaving Head” in the arts department and supervises campers as they make pillows and seats for chairs or stools at the camp.  A business administration major, she thinks her passion for this art has developed because it provides such a wonderful opportunity to get outside of her element.
Director Denice Dunn acknowledges that changing times have demanded adaptation.  One such change came a few years ago when the campus became “unplugged,” meaning no cell phones, no iPods, no computers.  The only exception is the iPod in each cabin which contains the music the girls have chosen to enjoy together during “downtime.”  However, earbuds are completely off limits and Denice confirms that as soon as the new rules took effect there was a noticeable increase in conversation and singing on hikes, on bus trips, and around the camp.
But many things have not changed. Uniforms are a tradition, and except for the substitution of shorts for bloomers, not a lot has changed over the past 100 years. It’s all part of a culture that encourages a young woman to throw on a uniform, pull her hair back into a ponytail, and get on with the joy of self-discovery, unencumbered.
Rudi Robbins Pillow, who attended camp for three years beginning in 1964, notes that today’s technical world has created an overly competitive environment for young people and cherishes the fact that Merrie-Woode is one of the few places where a girl has only to compete against herself.  She learned to love hiking and canoeing during her camp years and has memories of three-day hikes in the Smoky Mountains. Her three daughters attended Merrie-Woode, as have three granddaughters.  A resident of Killen, Alabama, she recalls a recent family wedding which was attended by six Merrie-Woode alumnae from all over the country.
This year, Denice confirms a wide geographic diversity will be once again represented, with campers from 38 different states and six countries. Over 140 people will be hired for staff positions, many of them former campers who are returning as counselors. The return rate is enviable and several full-time directors of the camp were at one time campers.
The camp’s centennial is a good excuse to look back at the vision of the three founders who wanted to offer young women a chance to explore their capabilities and challenge themselves in a nurturing environment.  That vision has become laser-focused as the years have passed.  Whether a girl’s dream is to hike Old Bald Mountain, sing her heart out in a musical lead, or earn a Captain’s Hat for accomplishment in the water, it will all be hers for the taking beginning this June, as a new century of campers follow the gleam. Girl power is clearly alive on the beautiful banks of Fairfield Lake.