Many a visitor to this colorful historical village has come to call Highlands, North Carolina home. Whether they mean to or not once they breathe the crisp, clean mountain air and view the awe-inspiring panoramas of the mountains beyond and the valley below they become captive to her charms. Highlands, along with many of the other quaint towns and villages that dot the landscape of the Highlands-Cashiers Plateau have been beckoning visitors far and near for centuries. Summer vacationers come in droves to escape the heat and rushed pace of the lower elevations, nature lovers visit year-round to witness the transformation of the mountains from season to season, families make the short drive up on weekends to enjoy one another along with a cornucopia of resort-quality amenities, restaurants and shopping, and couples make an escape for a romantic get-away where they might stroll through the woods to a seemingly magical waterfall or snuggle up close by the warmth of a fire on a cool evening. For many of these visitors, one visit simply isnt enough! 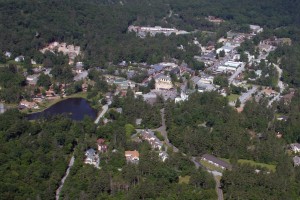 The same was true for a couple of visionaries in the late 19th century. Founded in 1875 by Kansas developers, Samuel Truman Kelsey and Clinton Carter Hutchinson Highlands did not live up to original expectations. Legend has it the two men drew lines on a map from Chicago to Savannah and from New Orleans to New York, in the hopes that the area where the lines intersected would become a commercial crossroads and major trading center in the South. What the two did not realize was the rough terrain soaring to over 4,000 feet above sea level was virtually impassable for early steam engines and intimidating for heavily loaded mule- and horse-drawn carriages. Awe-struck by the beauty of the region, the two purchased 839 acres and named it Kelseys Plateau. Their dream evolved to the development of a health and summer resort which quickly grew in popularity with wealthy planters from coastal South Carolina and Atlanta as they sought to escape the oppressive heat of the low lands during the summer months. At some point along her journey through the ages, the quaint Southern villages name was changed to Highlands. Years later, Highlands became widely acclaimed among the golf community when famed golfer Bobby Jones frequented the Highlands Country Club during the 1930s.

With more than 60 structures in and around Highlands listed on the National Register of Historic Places, its easy to see that this is a place as rich in history as it is in beauty. Central to it all is the historic downtown district home to The Highlands Inn (circa 1880), Central House The Old Edwards Inn (circa 1878), First Presbyterian Church (circa 1885) and Episcopal Church of the Incarnation (circa 1896) all located along Main Street. Main Street is also home to many upscale shops and exquisite restaurants that continue to draw visitors here. The very active Highlands Historical Society seeks to preserve more than 80 additional structures of historic significance. The Historical Society is housed within the Historic Village on North 4th Street in downtown Highlands in the House-Trapier-Wright Home (also known as The Prince House). Built in 1877, it is considered to be Highlands oldest existing structure and serves as a living history museum. The Historic Village also features Bug Hill Cottage an open-air cubicle that once housed patients ill with tuberculosis during the early 1900s. Under the care of renowned specialist, Dr. Mary E. Lapham whose TB sanatorium was one of the first in North Carolina many citizens of Highlands were saved from a fate suffered by many during the outbreak of a disease that ravaged North America during the early 20th Century. Early photographic and written records of life in Highlands are thanks to John Bundy who took stills of the region, its people and structures in 1883 and R. Henry Scadin who took photos and kept a meticulous diary of his experiences on the Plateau from 1889 to 1920. A true testament to the Appalachian culture, a charming series of historic log cabins can be found throughout Highlands. Constructed by builder Joe Webb during the 1920s and 1930s without the use of power tools or architectural plans, each structure is entirely unique. 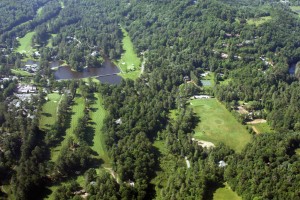 Today, the collection of country clubs and upscale communities in the Highlands area is as widely varied as the collection of lush foliage. Thoughtfully-designed golf courses abound, coexisting beautifully with the natural splendor that is synonymous with the area. Many of Highlands luxury cottages and mountain estates complement the natural setting on which they are constructed featuring heavy timber and stone accents and offering breathtaking views of the beautiful Blue Ridge Mountains. Year-round residents of Highlands live at an easier pace they know when to pause and take a gander at a beautiful sunset or to stop and smell the wildflowers.

We invite you to slow down long enough to experience the Highlands way of life. Contact Silver Creek Real Estate Group today for a personalized tour of some of the villages most exciting communities and subdivisions including Cullasaja Country Club, Old Edwards Club at Highlands Cove, Highlands Country Club, Highlands Falls Country Club, Lake Osseroga, Lake Sequoyah, and Wildcat Cliffs Country Club. Whether seeking your vacation home or forever home in the beautiful and historic Highlands area, you will find a local real estate expert in your Silver Creek broker. For more information about Highlands and the surrounding Plateau, we welcome you to visit our helpful website at https://www.ncliving.com/ which includes fine points about the individual communities, as well as photos and descriptions for available property and home sites therein. Call us at <a href="tel:+18287431999">828-743-1999</a> to schedule your special day in Highlands, e-mail us at info@ncliving.com or feel free todrop by Silver Creeks office located just west of the Cashiers Crossroads in the Shoppes at CreekSide. We look forward to the opportunity to introduce you and your family to this very special village community in the mountains of Western North Carolina.