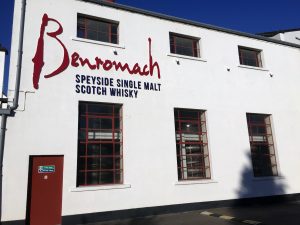 In Scotland, whiskey is both an artform and a part of daily life. Distilleries can be found in every nook and cranny of the country. The tastes of this spirit vary with the style and distillation process, and favorite brands are unique to personal likes and dislikes. During a recent visit to the region of Speyside, Scotland, I fell in love with a traditional single malt whiskey. Benromachs story is as legendary as its whiskey. A four-generation family ambition to own a distillery came true in 1993, when the Urquhart family of Gordon & MacPhail purchased Benromach to create a true handcrafted single malt whiskey. The passion for this liquid runs deep in this family, dating back to 1898 when John Urquhart started working with Scottish distiller Gordon and MacPhail. In 1915, John was named a senior partner, and the pipeline dream of owning a family distillery was born. His son Michael, who joined him at Gordon & MacPhail in 1933, worked hard in perfecting the single malt essence of days past. Benromach opened its doors in 1898, however when the Urquhart family purchased the distillery in 1993, it had sat empty for ten years. It was a clean canvas to create the masterpiece that the heritage of Benromach represents. With the use of copper stills and local Romach Hills spring water, the family set out to do something unheard of today, making whiskey by hand. At Benromach, they believe in a manual distillery. Every process is done manually by feel, sound, taste, and sight. Nothing happens with the machinery if the distiller does not make it happen. The process is unique to the distillery and instills a sense of pride in the makers and the product. Benromach uses the finest malted barley grown in Scotland, along with a combination of brewers yeast and distillers yeast in their recipes. They took what is known as a classic Speyside whiskey recipe and made it their own. Its obvious while touring their facility and conversing over a tasting that whiskey is their breath of life. In speaking with Distillery Manager Keith Cruickshank, his eyes brightened and spirit poured out in his words. The product packaging and the earth floor that stored their hand-filled casks offered simple, classic elegance and a natural feel that tugged at my heart and taste buds. Fairly new in terms of Scottish whiskey distilleries, they are certainly making a name for themselves, and were the first to create an accredited organic whiskey. With barley purchased from a local farm and environmentally friendly casks, the soft bourbon-esque whiskey has been a hit. My favorite single malt at the tasting was Benromachs 15-year whiskey. Its maturity, smoky whisper finish, and deep color from the sherry cask offered a bit of dark fruit taste up front. Its sister, the 10-year, offered a stronger smoke in the nose and could be considered a good entry-level whiskey for those trying the Scottish heritage liquid for the first time. Traditional single malt whiskey is not a commonly produced product. Blends can mature faster, offering income to distillers two or three times faster than a single malt. The Urquharts stand by the integrity of the single malt, the process, and their commitment to their values. Whiskey is the Urquharts calling, their lifes work. Each new generation to join the family business are custodians of the DNA to their whiskey process.