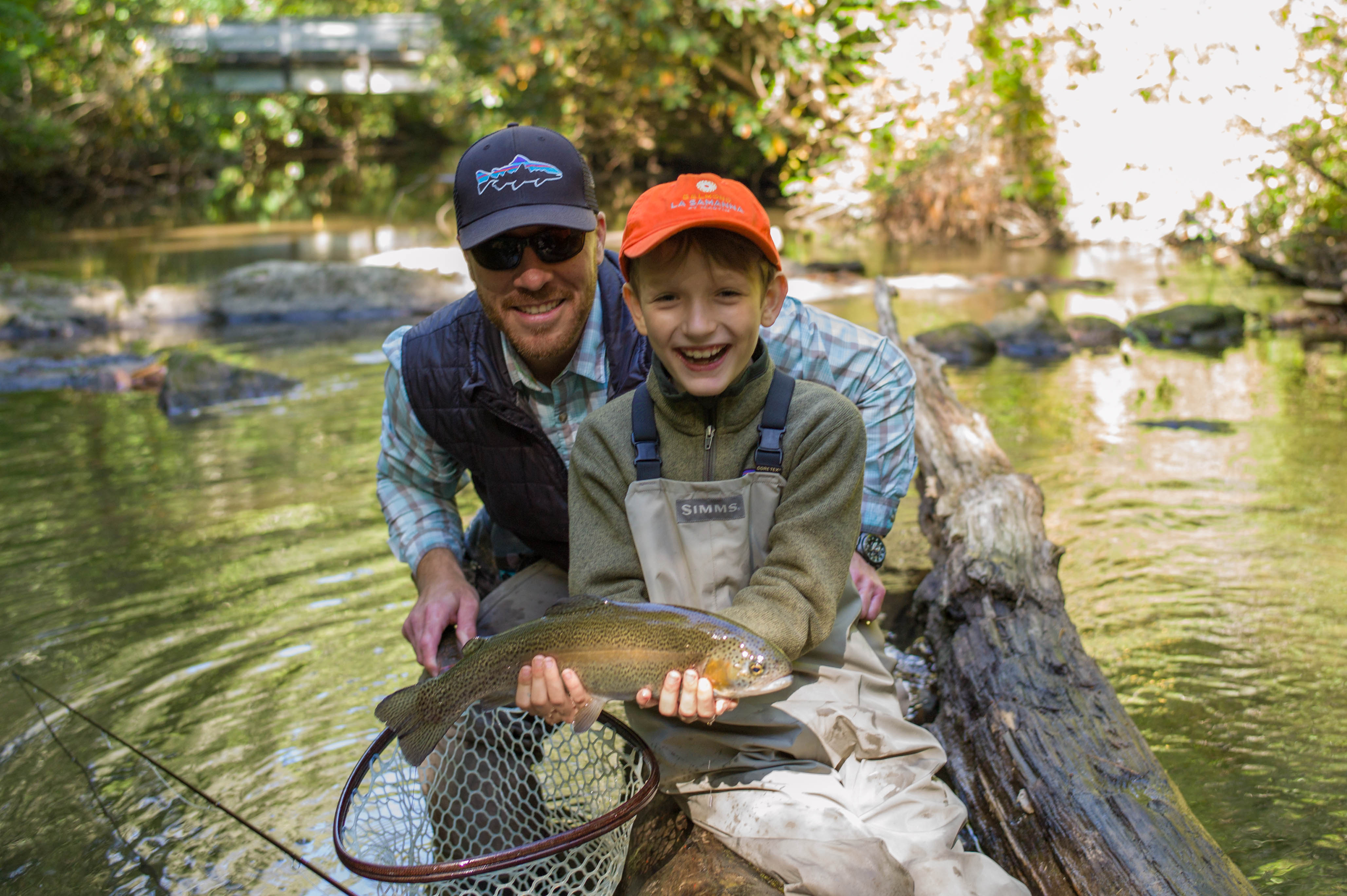 The mountains of western North Carolina lure those far and wide seeking higher elevations, stunning views, waterfalls, and verdant forests. However, it is the copious streams, creeks, and rivers lying within these mountains that draw fly fishermen of all levels and skills, year-round. North Carolina’s waterways are abundant with wild or stocked rainbow, brown, and brook trout, as well as smallmouth bass in midsummer.

When asked what attracts them to the sport, many fly fishermen find it hard to put into simple terms. The collective agrees there is no easy formula in making “the catch,” for an angler is challenged before even stepping into the water. The sport requires thought, instinct, and strategy. Great consideration goes into understanding the fish on that particular day, on that particular stream, since it varies day-to-day, stream-to-stream, season-to-season. Sometimes it varies hour-to-hour. One must consider the fish’s relationship with its environment, the weather, water temperature, level, and current. The answers are key in crafting a cunning approach to the day’s journey.

“There is an art to fly fishing,” according to Ben Elmer, an avid fisherman, prominent local guide and manager at Brookings Anglers in Highlands. “The draw for me comes with chasing the fish and convincing them to eat my fly.” With tens of thousands of artificial flies to consider, wisely choosing a fly that best matches the current bug hatch creates a greater opportunity for this to happen. Equally as important to an aspiring fish catcher is mastering casting techniques where the fly mimics the actual habits of the “bug du jour.”

Elmer describes the scene on the river. An angler first strategically scopes out an ideal location where the fish might be found. He then chooses his fly, not just any fly, the right fly that will tempt the fish. After quietly wading into the water, he fortifies his stance, chooses his cast, and delivers his fly. Patiently he waits. Feeling camaraderie with nature and perhaps his fellow fisher friends nearby, he enjoys the whip and grace of his cast as his fly dances on the surface. There is no impatience in the wait as the rewards are great, and then suddenly, possibly many casts later, STRIKE! He hooks one. A rush of adrenaline courses through his veins as he works to keep the trout or bass on the line. His skill at properly setting the hook will hopefully secure the catch as the duel plays out. However, stalking and catching the fish is only part of the game. “It is not over until the fish is successfully in the net,” says Elmer, “and that is a challenge in itself.”

Gail Bell, a ten-year veteran fly fisherwoman from Scaly Mountain, North Carolina says, “Fish are spooky and smart. Stealthiness is always your mantra. Imagine, now the fish has his choice from tens of thousands of natural food floating by. What are the odds he will choose your artificial fly? But when he does ... POW ... lights out awesomeness! It can be spiritual and technical with a little luck thrown in.”

“You don’t have to catch a fish though to have a good time,” Elmer shares like a secret. Fishermen vary in the experiences they seek. Some choose to float rather than wade, some want private over public waters, and some prefer to fish in the quiet winter months when they can take their catch home. Finding a peaceful experience grounded in nature is ideal for some who want to “get away from it all,” while others seek the thrill of the chase.

American author Norman MacLean who wrote A River Runs Through It equates fly fishing to a piece of music that slowly builds to an exciting crescendo. Maybe this metaphor best explains the growth of the sport and its captive audience of all genders and ages. Regarded as being meditative and therapeutic, restorative fly fishing retreats are plentiful and hosted by groups such as Casting Carolinas for cancer survivors and Project Healing Waters for military personnel and disabled veterans.

Brookings Anglers, with locations in Cashiers and Highlands, is a trustworthy resource for finding the best experience. Their guided trips are a terrific way to learn, grow, and perfect techniques. In addition, they offer fly-tying courses, licenses, and full or half-day packages for individuals, couples, and groups. Packages start at $200.